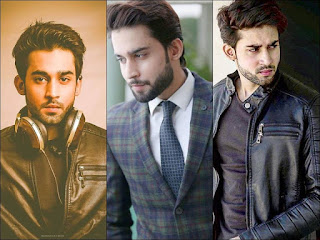 Most of the girls who are following "Dum Pukht" on Aplus are having a strong crush on this young, handsome guy Bilal Abbas Khan a.k.a Billu. I got a chance to interview him for my blog and he was very kind to take some time out for this. I'm so excited to share all of this with you guys. I hope you like it.
Starting with the basic information, he's a student of BBA in Szabist Karachi. He's 6 ft. tall and his date of birth is 4th June,1992.

Here's the complete interview:
Me: Do you have a nick name?
Bilal: My family calls me Billu.

Me: Tell me about your family?

Bilal: My mother is a fashion designer and, father is a police officer, a DSP. I have one sister and two brothers. My sister is married, elder brother is a chartered accountant and my younger brother is a student. Everybody is very supportive and I have a very peace-loving family. Like the one in Hum Sath Sath hain :p (Ma sha Allah)
Me: And, what's your relationship status?
Bilal: I'm in love with someone. (Okay, he didn't share her name guys :p )
Me: Biggest inspiration?
Bilal: Shahrukh Khan
Me: How did you get into this profession?
Bilal: I had always wanted to become an actor since I was a kid. I remember when I watched the scene from Kabhi Khushi Kabhi Ghum when Sharhrukh Khan got off from the helicopter and was running towards his home and was wearing a long coat, I liked it so much and I was like, I want to be like him, I want to do this. Then, one day my friend told me about the auditions for Hum TV's serial "Saaya-e-deewaar bhi nahi" and I went for the auditions and got selected. I've also been doing theaters with NAPA. I've always been a very bad student but I was very good in the co-curricular activities. I used to take my classes in the university in the evening and I worked in the theater during day-time. I easily got selected for "Saaya-e-Deewaar Bhi Nahi", it wan't hard for me at all. That's my luck because I think my acting and my looks were shit at that time. :p
Me: I haven't watched Saaya-e-Deewaar, I' following Dumpukht. What do you have to say about it?
Bilal: Dumpukht is my sweetheart. I had fun shooting dumpukht. The director was a sweetheart and helped me a lot. It's going great and the climax is wow!
Me; Can I know what's going to happen next?
Bilal: Well, I don't want to spoil it for you but whatever it is, it's amazing.
Me: Okay, what do you like to eat?
Bilal: I'm a very foodie person and I loveee Desi Food and Lasagna. I was asking my cook to make lasagna but he was like "aaj nahi banana, pehle utha karo" :p
Me: What does your mother cook the best?
Bilal: Everything. I love everything that she cooks but Daal Chawal, the most. 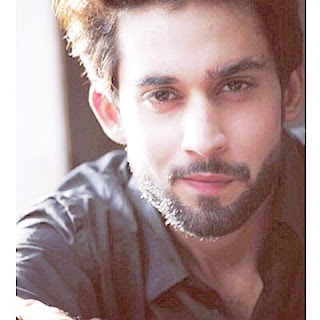 Me: Who are you the most frank with, in your family?
Bilal: My family is very friendly and they're all very supportive. It would be very difficult for me to choose one because my dad's my best friend, my mom's very close to me and my siblings too but yes, my younger brother. He's my partner in crime.
Me: When do you plan to get married?
Bilal: I have to achieve a lot, and I believe there's a time for everything so, not now.
Me: What do you think is the criteria of an ideal woman for marriage?
Bilal: Whoever clicks
Me: How do you deal with female fans?
Bilal: I love when people show concern no matter a guy or a girl, I feel honored. So, I try to stay connected through social media. Kabhi kabhi thoraaaa mushkil hojata hay jab shoot pe hota hoon.
Me: Do you wake up early or not?
Bilal: I love to sleep and I sleep a lot but depends on routine, I often have to wake up early for work, then I have to hit the gym and when I go home, I don't think of anything and sleep. My life's very boring
Me: How many projects have you done so far?
Bilal: It's been six months since I've joined this field and two are on-air, two more serials are coming soon, one on ARY and one on GEO. Also, My movie, Thora Jee le is also releasing in January.
Me; What made you famous?
Bilal: Dumpukht, obviously. Because the director was very supportive and I worked hard too.
Me: Who's your biggest fan at home?
Bilal: Everyone. But yes, my dad. He's my biggest fan and my best friend and he never misses a single episode of my drama. He also remembers what I did in that episode. He had always wanted to become an actor but he couldn't, because of some personal reasons and now, he supports me the most.
Me: Tell me about your nature, what makes you angry..?
Bilal: Um, main Farishta hoon (laughing), jokes apart, I usually never get angry but when I get angry, I just can't control it. I usually get angry on work-related things when someone tries to make me fool by thinking he's new in the field, he doesn't know anything etc. And, I'm a very shy person, I start blushing when someone praises me. And, I'm very reserved, I don't mix up at all, I 'm not social and I don't like going to parties. It's not that I'm rude it's just in my nature. "I'm just a little weird" (he said laughing)

Me: What was your first earning?
Bilal: (laughing) I can't tell that. It was too less. I earned nothing from Saayae deewar but I'm earning a LOT of money from Dumpukht.
Me: Where do spend your money?
Bilal: I don't have to spend my money on home because everyone at home is earning. I have saved a lot of money and I'm planning to buy a car for myself. In sha Allah.
Me: Do you have any other talent, aprt from acting?
Bilal: I'm a very good cook. I can cook a lot of things, I can cook qeema, lasagna, biryani with a little help, daal chaawal, I can bake cakes and breakfast.
Me: Hobbies?
Bilal: I don't have specific hobbies, but yes, I love to play video games and workout. You know, eat fit, look fit. I have 2,3 friends that I spend time with, daily.
Me: Most memorable experience?
Bilal: When I got selected for the movie. When I got a call, I thought my character in the movie will be a supporting character but when the director told me that my character was a leading character, that moment was memorable.
Me: Share something that your fans don't know about you
Bilal: I am very sensitive, I cry easily. Like, I was reading an article it was about a girl who was raped, and I started crying. And yes, I also cry while watching movies.
Me: Share one good and one bad thing about you.
Bilal: Good, I'm goal-oriented, family-oriented, hard working. And... I can't even think of any bad things right now
Me: Haha, like you said, main farishta hoon. And you've already told 3 good things
Bilal: (laughing) haha, jokes apart, the bad things are, I'm lazy, I sleep a lot and I can't control my anger once I get angry.
Me: Has anyone ever betrayed you?
Bilal: Yes, once. Long time ago.
What hurts you the most?
Bilal: Lies.
Me: Your best feature?
Bilal: Eyes, because people tell me that my eyes are beautiful. 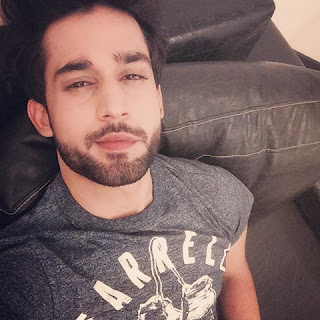 Me: First crush? and did you tell her?
Bilal: My class-teacher  in 3rd standard. I fell in love with her. And I told her, she smiled and kissed my cheek and  went.
Me: Did you ever propose someone and got rejected?
Bilal: Twice. Once in school and once in college. I don't know why girls find me so unattractive. (laughing)
Me: Would you work in India if you got a chance to?
Bilal: Yes, I will.
Me: Who are the actors/actresses that you want to work with?
Bilal: All good actors and actresses. I've always wanted to work with Noman ijaz and I have worked with him.
Me: Okay, I'll name a few people you have to describe them in one word. Javed Sheikh, Imran Khan, Ayaan Ali, Shahid Afridi, Mahira Khan, Fawad Khan, Sajal Aly, Hamza Ali Abbasi, Mamnoon Hussain, Nawaz Sharif, Altaf Hussain.
Bilal: Javed Sheikh: Senior Actor
Imran Khan: Great politician
Ayaan Ali: Model
Shahid Afridi: Boom Boom
Mahira Khan: Beautiful
Fawad Khan: Legend
Sajal Aly: Great actress
Hamza Ali Abbasi: well educated
Mamnoon Hussain: Our lost president
Nawaz Sharif: Corrupt politician
Altaf Hussain: Bhai
Me: Do you think people are jealous of you?
Bilal: I don't care about it even if they are..
Me: If you die and come back as another person, who would you like to be?
Bilal: Shahrukh Khan, no Leornardo, no. I would come back as Shahrukh Khan and if I die for the second time, I'd come back as Leonardo (laughing)
Me: Do you think you have achieved your goals?
Bilal: No, not even 1%. I have to achieve a lot.
Me: Biggest regret?
Bilal: That I haven't graduated yet. I can't complete my graduation because of so many projects right now but I regret that.. My mother wants to see me graduated.
Me: How are you going to propose the girl that you love?
Bilal: Well, that's a secret.. everything about it is a secret. Haha.
Me: What message do you want to give to your fans?
Bilal: That I LOVE all of them.  I love it when they appreciate my work and I feel honored when they show concern.

These were the questions that I asked one of the best future actors (and present too). I hope you liked the interview. Do let me know in the comments :)

Most of the girls who are following "Dum Pukht" on Aplus are having a strong crush on this young, handsome guy Bilal...